Setting A Fast Pace At Laguna 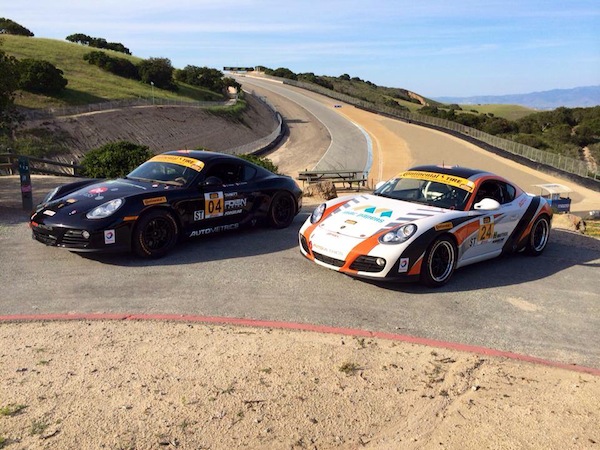 Both Isman and co-driver Remo Ruscitti were on pace all weekend, regularly running just behind the four Mazda MX5s that topped nearly every session by a sizable margin; a particularly impressive feat considering this Cayman was sitting on a used car lot just a month earlier and arrived at Laguna after a feverish 30-day build and with zero track time.  Nevertheless, the Cayman rolled off the Autometrics Motorsports trailer race ready, required only mild suspension tuning and ran flawlessly all weekend.

Once the green flag fell, Isman ran in fourth and fifth positions for most of his stint and navigated both the multiple yellow flags and the traffic resulting from the combined GS and ST run groups.  Remo Ruscitti then took to the controls of the #04 Cayman and immediately began dicing with the formidable drivers forming a nose-to-tail group behind the 1st through 3rd place Mazdas that had gapped the rest of the field.   Bumped and strongarmed by IMSA and sportscar veterans, Ruscitti passed and repassed his competition, concluding his race with an aggressive and well-timed pass that saw him move from 11th to 9th on the final turn of the last lap.

David Baum and Cory Friedman in the #24 Autometrics Motorsport / Mac Papers / Hastings / Porsche Cayman experienced an overheating engine early in the second practice but nevertheless overcame the lack of setup time to qualify mid-field in 16th position.  David Baum took the green flag for his first race at the fabled road course, produced consistently quick, clean laps, and gained several positions for his efforts.  Co-driver Friedman took over for the second half of the race and quickly moved to 13th position where he would remain until the finish.  Both Baum and Friedman ran well and managed to fight for position despite the #24 Cayman experiencing oversteer.

“If you were to look strictly at the results,” said team principle Gordon Friedman, “it would be easy to overlook just how well we ran and how optimistic we are for upcoming events.  Both cars showed front running speed, even though this track drastically favors the 500-pound lighter MX5.  We’ve got quick cars and drivers, in other words, and we’re expecting big things when the Continental Tire Sportscar Challenge travels to the tracks that historically favor the Porsche’s mid-engine layout.”

Look for Autometrics Motorsports to build upon this strong performance when the IMSA Continental Tire Sportscar Challenge visits the Lime Rock Park, May 23-24, for round 4 of the 12-race season.

Autometrics Motorsports has been building and campaigning Porsches at the highest levels of competition for more than thirty years and provides these services for customers across the United States.  More information about the team and its services are available on the team’s official website www.autometricsmotorsports.com