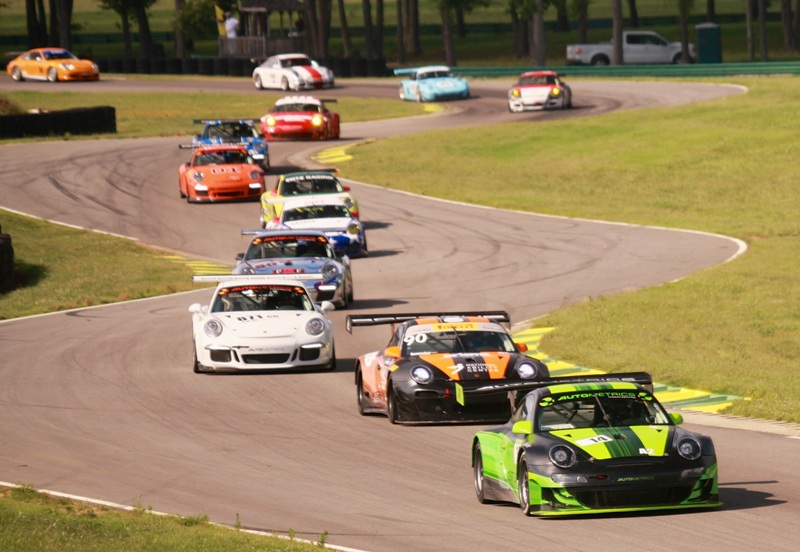 The VIRginia International Raceway PCA Club Race in June has traditionally been the hottest weekend on the calendar, and 2015 regrettably did not break that trend with heat indices over 100F every day. We did indeed use a staggering 900 pounds of ice between set-up on Thursday and pack-up on Sunday. The intense heat takes its toll on people and race cars alike, and unfortunately, not even we were immune from the effects. One transmission did not survive the weekend, and on a few occasions, we had shifter cable ends pop-off the transmission. Still that did not keep us from producing very impressive results. 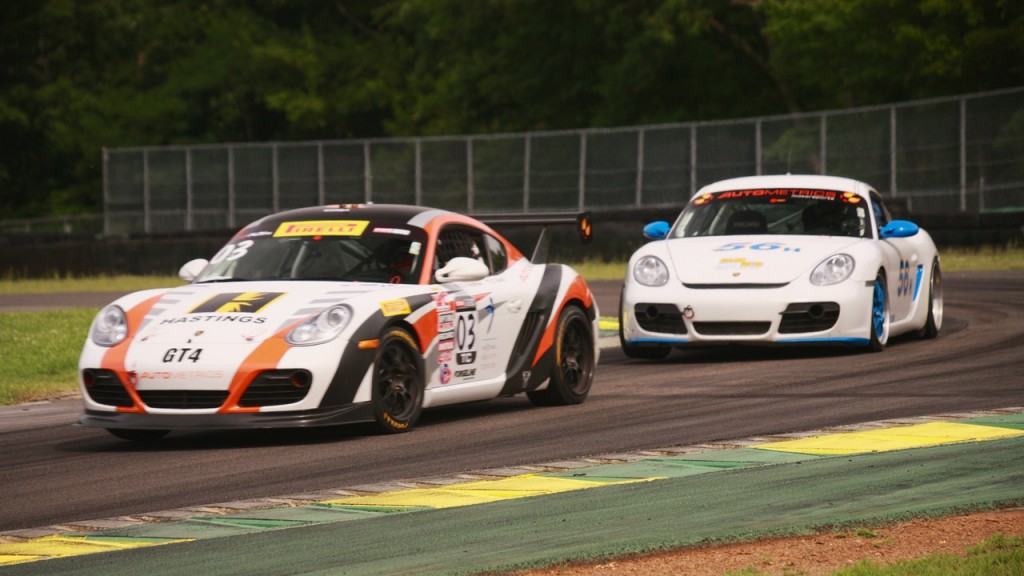 David Baum ran our World Challenge Cayman, and though it does not really have a class that fits, David was consistently in podium contention despite being out-gunned by early 911s built for the class. In H-class, Bob Hahn and Jimmy Martin were dicing for podium positions in the sprint races. Jimmy also won the fun race, and he and Cory finished 1st overall in the Enduro. Chris Lewis was running respectably in the huge GTB1 class in the sprint races. He and Cory co-drove the enduro, and in the warm-up, Cory took down the B1 track record by a comfortable margin. Chris took the checkered flag for the enduro in 2nd place. 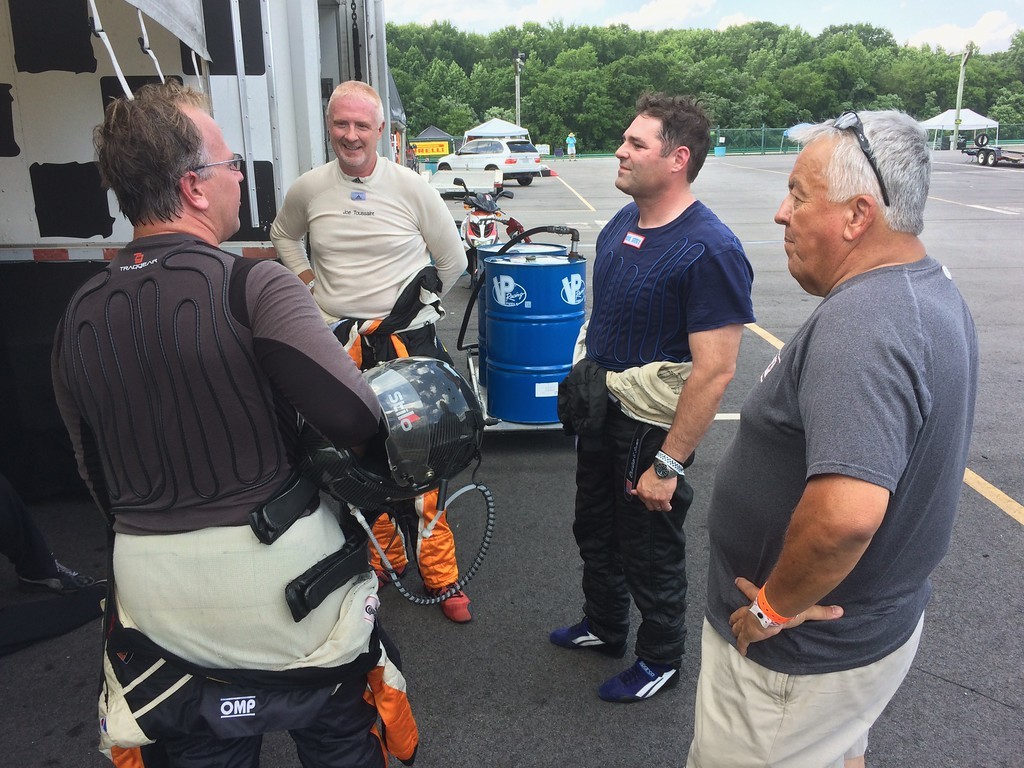 In the “Cup” race group, Cory, Joe, Chris, Gary and Mac were consistently among the top-5 cars overall. Mac McGehee moved up from C4 to C5 class this weekend, and he adapted very well to the new car, winning the fun race and finishing 1st and 2nd in the two sprint races. The only C5 car quicker than Mac was Gary Pennington who reset his own C5 track record from last season. Chris Brown did not have much competition in C6, but a 4.0 liter RSR offered some challenge. Chris swept class wins and track record, always finishing 3rd overall behind Joe and Cory. Joe Toussaint had a strong weekend, consistently turning laps under the previous track record. In the enduro, Joe had such a massive lead, that even when a tire let go with a few minutes remaining, he still ended up 3rd overall. Cory Friedman also completed the sweep on the weekend, topping every practice and sprint race, beating the old overall track record, then kept raising the bar from there. 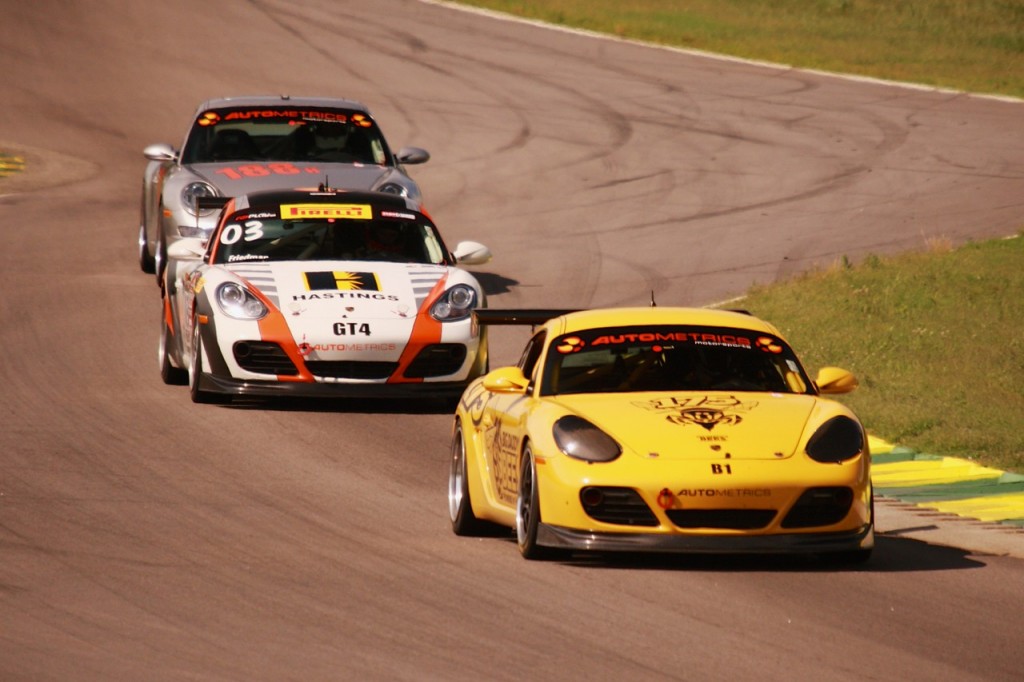 With every driver earning a podium and no less than 7 class wins and 4 class track records, we are certainly happy with the results. Add no rain and no crashes to that list, and you end up with a weekend that’s pretty hard to beat.