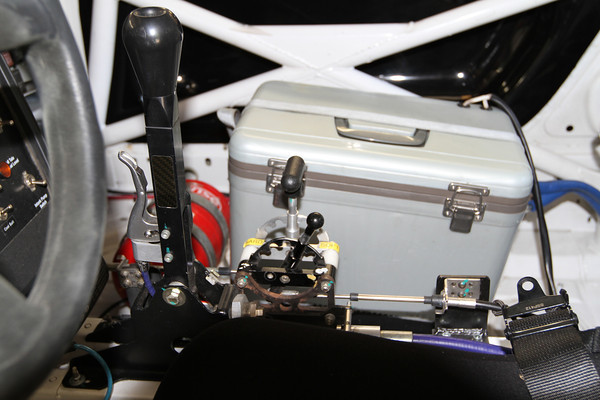 Heel-and-Toe downshifting is quickly becoming an obsolete skill.  It is speculated that some of the younger pros in formula cars or prototypes never competed with a clutch pedal but went straight from karts to paddle-shift race cars.  Simplified downshifting used to be reserved for top level racecars and exotics, but dual-clutch technology has brought automatically shifted manual transmissions to the mainstream.  Porsche’s new 991 GT3 Cup might eventually use a variation of the dual-clutch PDK transmission, but in its first model year, it uses a traditional single-clutch sequential operated by an independent paddle-shift system.  This is the first time a ‘cup’ has been delivered without a need to rev-match on downshifts.

The sequential in the 997 GT3 Cup has earned a reputation for being susceptible to abuse and expensive to repair.  Damage occurs primarily during downshifting and is a function of non-synchronized dog-tooth gear engagement, manual non-ABS brakes and a triple-disc racing clutch.  The combination makes a proper rev-matched downshift unforgiving compared to most Porsche racecars, and the throttle-blip is the most cumbersome component.  Downshifts are all performed with the same forward push of the sequential shifter, and that motion is exploited on throttle auto-blippers.  Different methods are used, but using the same action to engage the lower gear and open the throttle allows the driver to concentrate on braking and clutch timing.  This gives the driver improved braking performance and fewer transmission bills.  There are two leading methods employed; the ‘Manthey’ unit and clones use a solid rod that connects to the bottom of the shifter and uses a small wheel to physically push the throttle pedal.  The Porsche Motorsport design routes the throttle cable through the shifter assembly, and shifter motion will pull the throttle cable directly.  Both designs work well, but we prefer the Manthey method because it pushes the pedal, so if the driver instinctively blips himself, he’ll simply push along with the blipper, and it will be seamless.  The PMNA unit leaves the throttle pedal stationary, so a manual blip will add to the auto-blip and cause an over-blip.  The clutch pedal should be manually operated on downshifts regardless of blipper used.

The difficulties with the rev-match are not exclusive to 997 cups.  We had a 996 GT3 Cup driver with an ankle injury who had reduced articulation in his ankle and could not blip effectively.  An H-pattern shifter does not allow shifter motion to be used, so we developed a pneumatic system that was operated by a button on the shifter.  It was far more complicated than the sequential systems, but it proved very reliable and effective, even in 24-Hour competition.

In-car videos with a pedal-camera overlaid will become increasingly rare (or boring), and those proficient in the technique will likely feel some regret, but the evolution seems inevitable.  The debate will likely continue until the final days of the clutch pedal, but few will forget the first time they saw the quick footwork of a smooth heel-and-toe downshift.