Celebrating 50 years of the 911 at Daytona 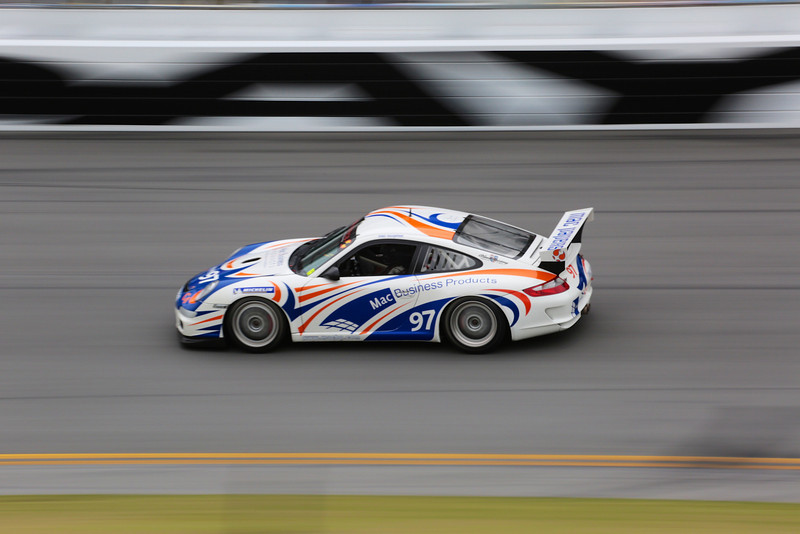 Much like the roller-rink birthdays of our childhood, this past weekend’s HSR Daytona Historics celebrated the Porsche 911’s 50th birthday with partygoers driving in circles to loud music. 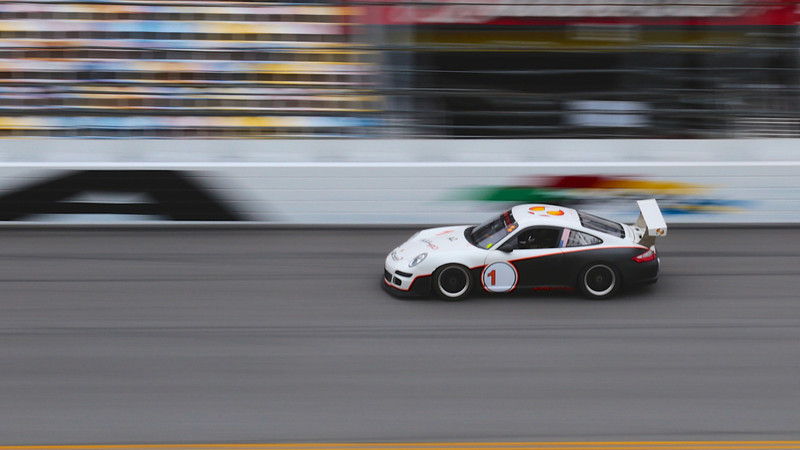 To be sure, there were some key differences between this party and those of our childhood.  Circles were a considerably faster with some cars in the Prototype and GT1 classes besting 200 mph.  Music was significantly louder (and, in the case of our rink DJ, better) with grumbling flat-sixes and wailing Judd V-10s filling the air. 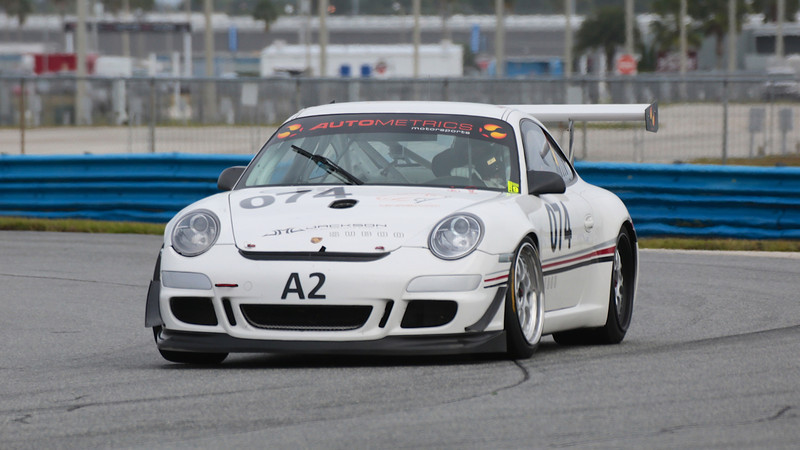 Autometrics Motorsports arrived at the track with three Porsche GT3 Cups prepared for team drivers Mac McGehee, Laurent Verstreken, and Cory Friedman, and all immediately set about running up front from the moment the trailer doors opened.

Cory Friedman in the #1 Autometrics Motorsports 997 GT3 Cup qualified on pole for Friday’s 911 feature race despite the qualifying session being hampered by constant traffic and Friedman having just one relatively clear lap.  In what would become a theme for the weekend, however, the weather would have other plans.  As the 911 feature race got underway so too did the rain which had only been a light drizzle before.  As the rain increased and decreased in quick succession the decision to switch to rain tires became a crapshoot.  Verstreken and Friedman chose dry tires while McGehee chose rains.  In the end, McGehee’s decision was the wise one and he paired this correct tire choice with consistently quick driving to finish the race in third place. 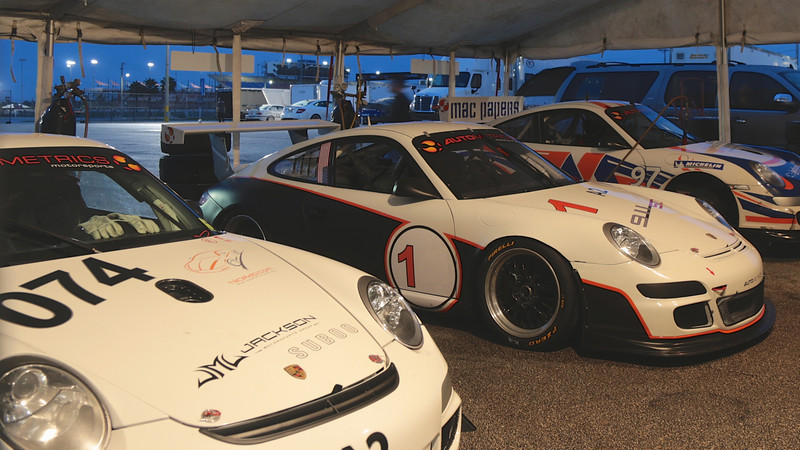 Saturday again saw inconsistent weather and a qualifying session heavily influenced by traffic.  Cory Friedman was again the fastest Porsche on track but as this field was combined with the significantly more powerful and wider-tired GT1 cars, his time was good for 6th overall.  Starting position soon became irrelevant as the skies opened during the race warm up laps.  Many drivers, including Laurent Verstreken, immediately pitted for rains and rejoined at the back of the field.  McGehee soon followed and then Friedman was able to come in as the race went green.  Cars that took to the warm up laps on rains held an immediate advantage, holding their qualifying position on the right tires while those that changed later were forced to play catch up.  Verstreken and McGehee put in outstanding performances holding top five positions for the duration.  Friedman charged through the field, first regaining his lost lap and then, heading towards the checkered slipping by Verstreken for third.  Friedman took third, Verstreken fourth, and McGehee fifth. 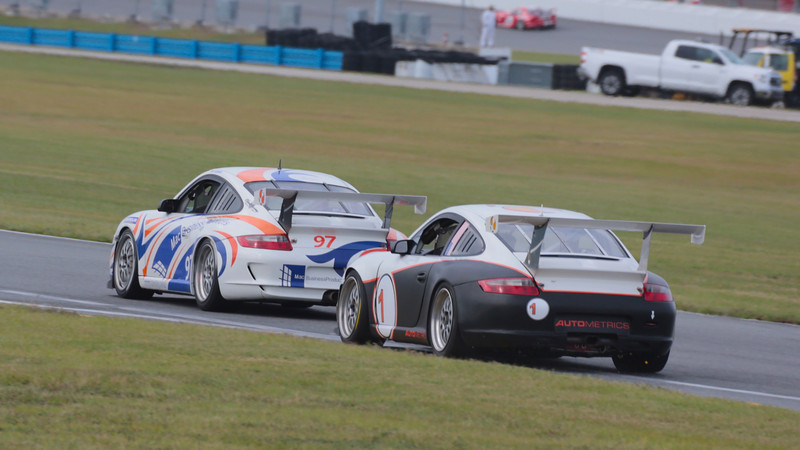 Sunday’s first race was a wild one.  Qualifying positions carried over from Saturday but this was the only consistency to be found.  Saturday’s rain had thoroughly washed the course and the resulting “green” track offered little grip.  The race briefly went green before it was black-flagged for oil on track.  By the time the race went green again oil dry was across the infield sections and the GT1 cars were particularly affected.  The resulting speed differential saw Friedman in the leading Porsche Cup passing GT1s through the infield only to be repassed by the 200+mph GT1s on the banking.  Nevertheless, Friedman was able to maintain his lead to secure a first in class.  Verstreken again turned in a consistent fourth place drive, and McGehee raced to seventh place. 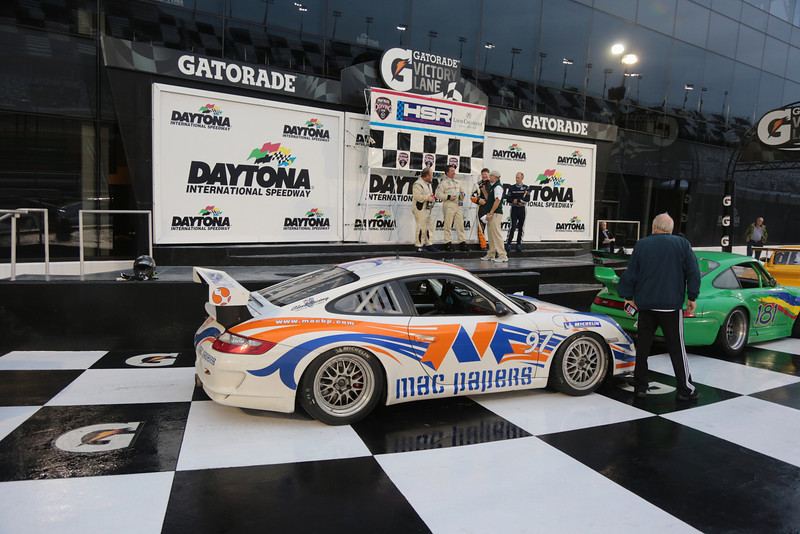 Finally, Sunday witnessed a two-hour enduro with all classes of cars in attendance on track at once.  McGehee and Friedman shared driving duties with McGehee driving a consistent one-hour opening leg and Friedman closing out the final hour.  The duo’s speed and traffic awareness paid off with a first in class and fifth overall.

The weekend was, by all accounts, a wonderful was to ring in the 911’s 50th and we’d like to thank HSR for putting on such a great event.

As always, contact us if you’d like to campaign a Porsche on track, receive driver-coaching or engineering expertise from our record-holding team, buy, sell, store, or maintain a Porsche.