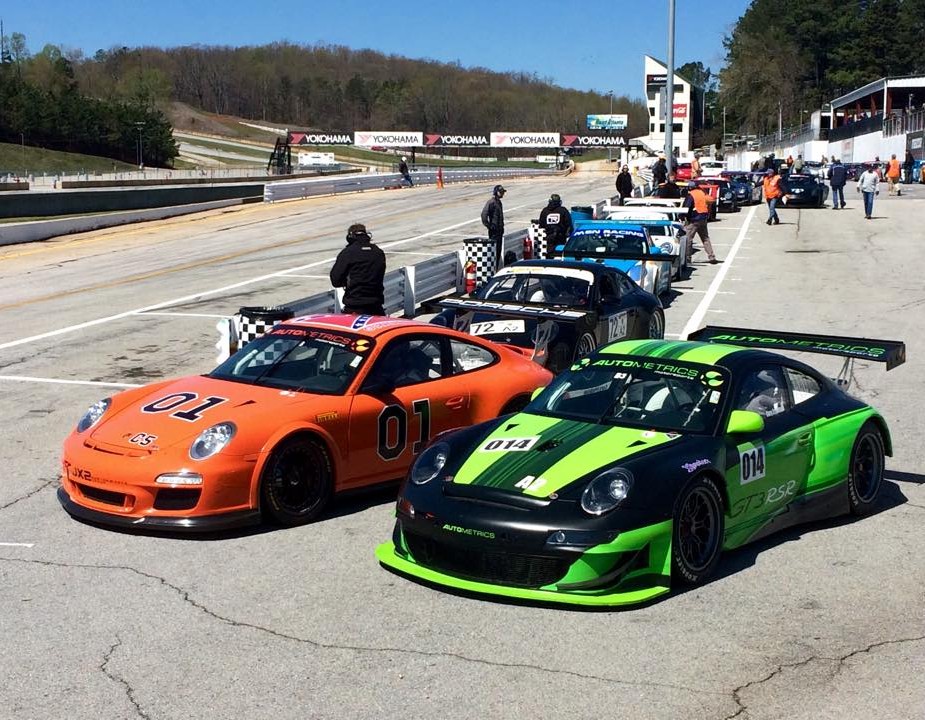 The weather at this year’s Road Atlanta PCA race was a massive departure from previous years.  It was unusually cold, but the absence of torrential rain, which had become the trademark of this race weekend, was the big surprise.  The Autometrics crew rolled in with 11 cars, and our results were as fantastic as the weather.

Chris Lewis chose to bump his Cayman S up to GTB1 class, and despite being a bit overweight, continually moved up the timesheets, ultimately scoring a class podium in the enduro.  Jimmy ran his Cayman in H class, and was on the podium in both sprint races.  He and Cory teamed up for the enduro, and despite their near class-record pace, they couldn’t quite catch the leader, who had the fortune of a caution during his pit stop.  We debuted a new H class 997 build for Bob Hahn this weekend, and both he and the car ran excellent with a 2nd place finish in each of the Saturday sprints.  In I class, Charles Price consistently challenged for the lead, but ultimately took home 2nd in all 3 races.  The last letter-class car was Duncan McPherson, and he took a sweep of J class wins.

In the GT race group, we had similar results.  In the Points Sprint Race, Autometrics drivers took 4 of the top-5 positions overall, with the last spot filled by the GTA2 car of Normand Houle, who was hauling thanks, in part, to his new Autometrics-built 4.0 liter engine.  David Baum easily outclassed the GTC4 in the sprints, but fell just a little behind (factory Falken RSR driver) Bryan Sellars in the enduro.  Chris Brown earned the overall Pole position for sprint race 1, and he went on to win both sprints in GTC5.  Just behind him in GTC5 was Gary Pennington.  Bruce McPherson spent the whole weekend on the bumper of the GTC3 leader, and Mac McGehee ran a good pace, but was sidelined with engine troubles.  We just completed some massive upgrades on Cory’s RSR, but without time to sort the car, it suffered from a few component failures and sub-optimal handling.  Still, it was enough to start from pole and comfortably win overall in the second sprint.

Overall, it was a fun and successful, if not perfect, weekend at the always awesome Road Atlanta.  Follow us on Facebook for the most up-to-date photos and updates on races and project cars.