Some of the coolest Porsches aren’t a product of the factory; they’re a product of a creative owner’s imagination.

Take for example, this 1968 Porsche 911L that recently came to Autometrics for engine and chassis tuning.  The car started as a relatively stock, narrow hip, short wheelbase, long hood 911.  But the owner wanted something more and transformed the 911 into this R-Gruppe inspired pseudo RSR.

The most obvious changes are to the exterior and take the form of impeccably flared bodywork, eye-searing green paint (which is not viper green but a shade chosen by the owner), European-spec H1 headlamps, Cibie fog lights, R-model featherweight light lenses, and a through-the-hood quick-fill fuel-filler.  The flared fenders perfectly cover original RSR wheels and the passenger side rocker panel shows hard lines running to and from a front mount oil cooler. These changes make for a striking and attractive car, but the most significant changes lie just below the bodywork.

The L’s formerly luxurious interior has given way to a roll cage, black vinyl floor covering, RS door cards, and vintage racing seats upholstered with black vinyl and corduroy inserts.  The spare tire in the front compartment has been tossed in favor of a genuine 100-liter fuel tank.  Most importantly, the engine compartment contains an engine befitting such a competent chassis; a twin-plug 2.8 liter RSR spec engine with high butterfly mechanical injection. All of which is connected to the substantial rear tires through a race-spec 901 four-speed gearbox. 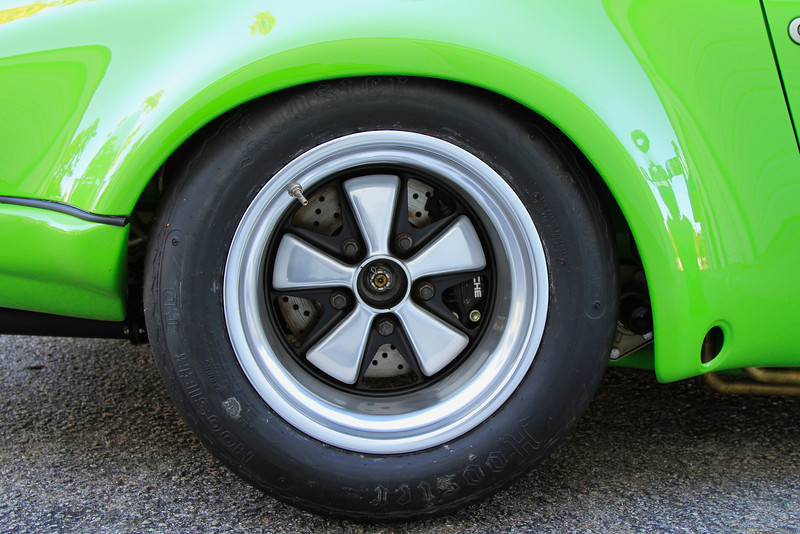 Taken together, these modifications make for a car quite unlike anything that ever emerged from the Porsche factory.  And yet this 911 is unmistakably, perfectly, Porsche.

Here at Autometrics Motorsports we’re always glad to see creative owners build such great cars, and we’re honored to have performed the final tuning and chassis setup on what is a potent and beautiful vintage sports car.  If you’d like to have a Porsche built from the ground up to your tastes, or a perfectly original 911 tuned and freshened, contact us.